I remember one time I was watching a spotlight on Stevie Nicks, she had said she never wanted to have children — as it would remove her from her path of being a true artist.  As much as I love Stevie Nicks, I totally respectfully disagree with her in this instance.  (Stevie later on actually in life that she regretted having made that decision. My heart goes out to her as my children have enhanced my life.) Lea Lumi\’ère is genuinely the perfect example of a woman who is a mother and authentically an Artist in the truest form of the word.
Lea is not only a writer but also paints, dances and recites poetry.  She has one of the softest and delicate souls of a being I’ve ever seen.  When you read her work or look at her paintings it’s obvious that it come from a profound crevice deep in her being.  What most who don’t have children do not comprehend is that
having children doesn’t deter from the art – in fact, children force you to look upon things in a different light which in my opinion enhances your art.  For more information on Lea check her out on Instagram @lealumiere.  Just a small footnote Lumière in French means light and Lea is indeed a bright shining light in a world that can be truly riddled with pure pitch. 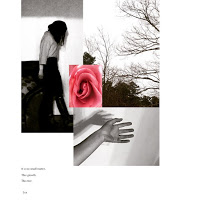 RMMW: We all have an inner critic, how do you contend with yours?
LL: I’m very critical of my own work. It’s the irony of why I don’t edit much, and need to share on impulse. Once I look at my work in a judgmental, precise way, there are always things I don’t like.
The fact that I’m hard on myself I guess has it’s upside too, as I have pushed myself to keep creating something better than before. I try to get out of the box with the automatic language I might use, and broaden the imagery.
RMMW: Have you ever been creatively blocked, if yes how have you overcome it?
LL: Of course! Most of my work comes from an intuitive place, so when I allow myself to just write, without over analyzing my work, the flow usually comes. This is not always easy to do, and of course there are times that I don’t feel like writing at all, and then I usually just don’t! I’ll take a break, or create in a different way. I don’t think it’s natural to force ourselves to create when we’re not feeling at, and at the same time, I do believe.  Sometimes it’s good to push through the inner-critic and create, regardless — Of what the end product looks like.
RMMW: What is your favorite artist’s tool?
LL: I love a young, unused paintbrush with fat, plush bristles!

RMMW: What is your favorite medium to create in?
LL: I would say painting with acrylics is top of the list.
RMMW: What came first, your poetry or your artwork?
LL: My poetry. I have written since I was a young kid. I still remember a “song” (read: chant) I composed at age 4. It makes no sense, but I still laugh about it. The lyrics were:
“Cocoa in the pan,
Mix it,
Scrip it,
because all the one of yours,
jump in the pan!”
I always loved art, and I come from a creative and musical family, but I’ve only gotten into painting in the last couple of years.

RMMW: What inspires you?
LL: Watching the ocean fighting the shore. trees swaying. the moon hanging low over the night…. so much of nature really. but also, humans; watching exchanges between people and kind of seeing them in slow-motion, Catching the laughter between a group of old men, sitting and discussing books.
The “starving artist” … Relentless people that are unapologetically themselves. Stories of strong women through history… Praying…. so many things. Inspiration is honestly everywhere, it’s often just the pace of our breath that doesn’t allow us to stop and notice.
RMMW: What element of art do you enjoy working with most?
LL: I love working at an intuitive level; kind of shutting off the analytical mind in a sense, and allowing the imagination to take its course. I often think of young children playing with toys— how they can be so caught up in a game of— essentially fake— police or fireman… and this can go
on for hours! They are present, knowing deeply how life is the richness we let thrive in our minds. 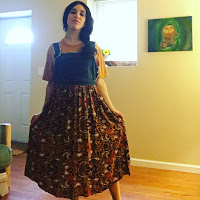 It’s often hard to do this when I paint. But I dim the lights, light a candle, put on music, and try to forget (almost) what is being put on the canvas.  It’s an emotional release, a way to let thing take form without knowing they were even there in the first place.
RMMW: What is your artist’s background?
LL: I am a student, always, hence my lack of background… I am no expert, but my family
Does share a variety of creative outlets that I can lay any blame for! My Dad wrote music for years, and he plays guitar and piano… my Mom plays guitar and used to act in dramas, my brother electric guitar, my sister draws, paints, dances, sings…. lol… and between all of my five brothers (yes, you heard right) they dabble in woodworking, music, design etc… so I guess I kind of just blend into the family scene in that way. But I do hope to learn more aspects of the painting medium, and develop it more.
RMMW: What role do you feel the artist plays in today’s society? 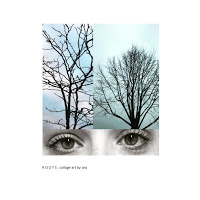 LL: The kind of role in the show that is an off-beat, five minute hilarious scene, that knocks people off their paralyzed seats— That is somehow not connected at all to the rest of the show, and yet in no way would the show have been complete without. In short, everything. I believe art is what gives hope. In whatever form, the way you take your pain and make expression from it is nothing short of miraculous. It’s a birth. I think the artist is what gives society a purpose to find themselves, their inner soul, their spirituality.
RMMW: How has your art evolved over time?
LL: Stories were what I  wrote when I was young. I remember writing  this novel in Highschool that I would pass around to the older kids, leave parts of it in their lockers, and they would read it during class… I also wrote a lot of long form writing, just one long page without even punctuation, spewing the imagery  I would see in my head to express myself… only once I found myself somehow
On Instagram did I develop a taste for the fine wine of poetry. And now I’m kind  of addicted.
RMMW: What is your first artistic memory?
LL: See above question on my first “song”…. but also I have fond memories which are still transpiring to this day, of cutting my clothes and reconstructing them— the dress becomes a shirt, that collar gets murdered and replaced by a scarf, a hem becomes a raw jagged lightning streak of cloth… my sister still laughs when she sees me wearing something that I nonchalantly try to hide its glaringly obvious surgery done by me…. 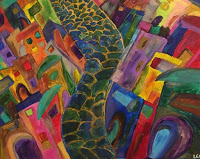 But I also have the fondest memories of my Dad telling us the most creative bedtime stories. He would sit between two of my brother’s beds, on the floor, and be wrapped up in the vivid details of his story. I used to sneak in and crawl under my brothers bed, until I was discovered and my brother would make me leave and wait for my own turn for the story… this didn’t stop me from launching out and crawling under again… and again… it was a thrill for me.
RMMW: If you had a superpower what would it be?
LL: Good question…. hmm. Maybe I would want to be able to travel instantly to any location and back…. (and document my wandering)